Asya Branch still gets goosebumps when she thinks about that moment. There she was on the stage, surrounded by the other members of a very elite club: the top five contestants in the Miss USA pageant. One by one, their states were called. Fourth runner-up, third runner-up, second runner-up. Suddenly it was just Branch and the contestant from Idaho.

And suddenly, it was all a blur. There was clapping, there were cameras, there was music, there were flowers, and there was crying as her predecessor placed the diamond-studded crown on Branch’s head. When Branch finally caught her breath, it hit her all at once what she had accomplished. In an instant, she had made history as the first Miss Mississippi USA to win the Miss USA crown, just a year after becoming the first Black winner of the state pageant.

“When you have a dream in your heart for so long and it finally comes to fruition, it almost seems unbelievable,” she says. “It was very surreal. It was a feeling of shock and excitement, and realizing I was accomplishing my dreams and my goals.” 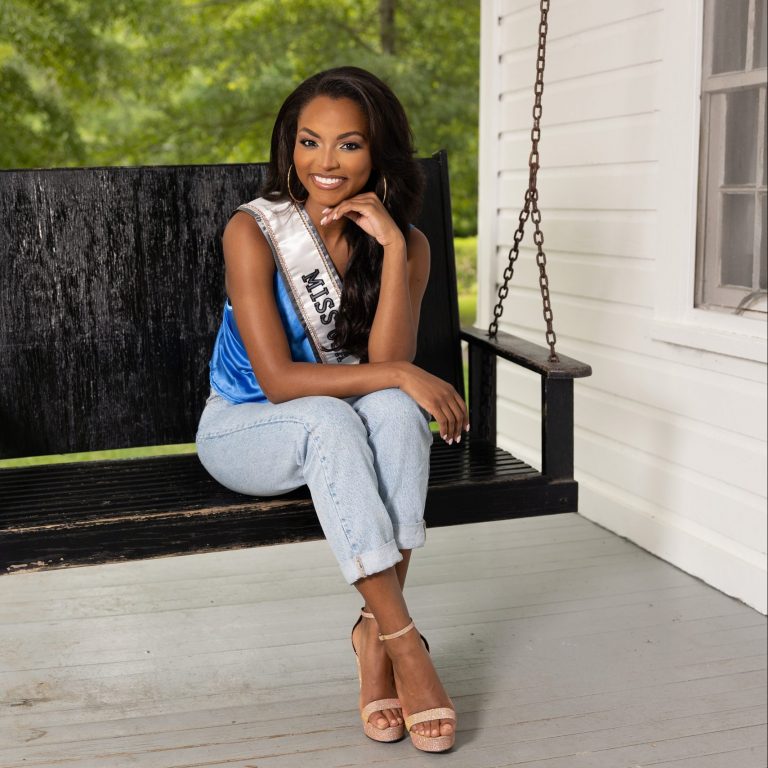 on the porch of the Elvis Presley Birthplace in Tupelo 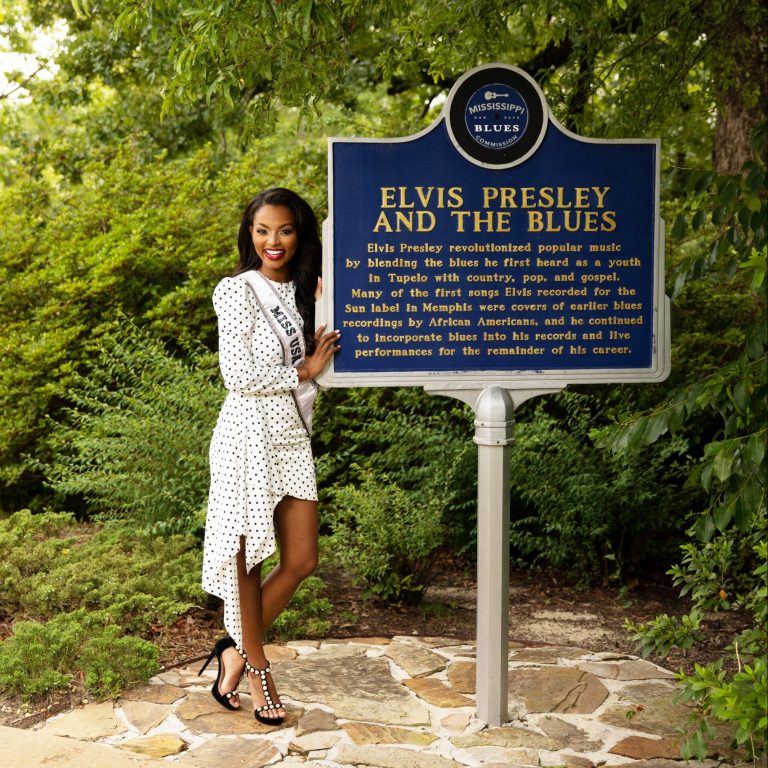 Since her reign as Miss USA began in November 2020, Branch—whose first name is pronounced “Asia”—has seen her life change dramatically. Whisked away from the Magnolia State to a new home base in New York City, she embarked on a year of duties ranging from public appearances to speaking engagements—albeit mainly virtual appearances and digital engagements during the pandemic restrictions of late 2020 and early 2021. But even with her newfound hectic schedule, Branch’s heart remained anchored to her hometown of Booneville, MS, in the Hills region, and to the family and friends who supported every step of her incredible journey.

Branch’s route to the Miss USA title actually began in Michigan, not Mississippi, but her family moved to Booneville the summer before she started kindergarten. They readily traded Midwestern urban life for a more peaceful and pastoral existence, with wide open spaces, trees and plenty of room for pets of all sorts—from dogs and rabbits to horses and chickens. “I think it gave us the life we were always looking for,” she says. “I loved the warmth, the sunshine—and what really got me was the Southern hospitality, how everyone was just so nice and so welcoming. It really made it feel like home right away.”

The sixth of eight children, Branch faced a life-changing struggle a few years later when her father was arrested and sentenced to more than a decade of prison time. Left at home to deal with feelings of loneliness and shame, Branch sought to find a way out of the darkness—not just for herself but for other children going through similar circumstances.

“You forget there’s a family being directly affected by the situation,” she says. “So often, children become abandoned by their parents once they’re incarcerated, they end up in the foster care system, and they end up incarcerated themselves later. It’s just a cycle of negativity. I knew that I had a strong support system that kept me from becoming a statistic, and I wanted to be able to be that voice and that encourager for other children who might not have someone to keep them on the right track.”

Branch’s voice grew louder once she began competing in local pageants at the age of 17. Aside from her warm brown eyes and her brilliant smile, she captured the minds of audiences and judges with her passion and purpose, including a social justice initiative she dubbed “Finding Your Way: Empowering Children of Incarcerated Parents.” She won the title of Miss Mississippi, part of the Miss America program, in 2018, and a year later she became Miss Mississippi USA, setting the stage for her Miss USA win.

“I just really wanted to make a positive impact, and kind of change the stigma,” she says. “I wanted to let people know that it’s a situation that’s out of the child’s control, and so the child shouldn’t be treated differently, because that was one of the hardest things I had to deal with.”

Becoming the first African American woman to win the Miss Mississippi USA crown gave Branch a sense of pride that would carry her through to the country’s biggest pageant stage. “I’m so, so grateful to have had the opportunity to be that example for the next girl and to show the diversity and inclusion there,” she says. “I’ve gotten numerous messages from mothers and from young girls who say, ‘You’re my inspiration.’ And that’s what I strive to be—I want to inspire people to be whatever it is that they aspire to be. In that moment, I felt like I had taken my next step toward the goal of being an example for some young girl or boy who had a dream but had never seen themselves reflected in the people who held those positions.”

Meanwhile, Branch was a student at the University of Mississippi, majoring in integrated marketing communications with an emphasis on public relations. She also launched her own cosmetics company, Branch Beauty, capitalizing on her popular YouTube makeup tutorials with products like eyeshadows and long-wearing liquid lip tints perfect for the pageant stage and beyond.

“I’ve always had a love for makeup, and I learned the word ‘entrepreneur’ when I was five years old,” she says. “I’ve always had it in the back of my mind. I was in a phase of my life where I was asking myself, What is my next goal? What’s next for me? I made it happen, and it’s slowly expanding. It’s just a lot of fun.”

The reactions from back home after winning the Miss USA crown were “overwhelming, but in the most incredible way,” Branch says. “The amount of love and support that Mississippi has shown me over the years has been amazing, but the amount of love and support that I received after that moment was just almost unfathomable. It’s indescribable how proud I am to represent each and every individual in the state.”

And while she remains open to the career opportunities that might present themselves after her year in the spotlight—she mentions the entertainment industry as a possible target—Branch says nothing can diminish her fondness for the state of Mississippi. “I miss the calmness, the sense of peace that’s there,” she says. “I miss the trees, the birds. New York is a concrete jungle, and while it’s amazing the hustle and bustle there, I miss the nature, seeing the fields of sunflowers, and the other little things that make it feel like home. There are a lot of hidden gems in Mississippi. There’s more here than people realize. There’s a lot of history, and a lot of growth as well. You have to be ready to explore.”

Between visits home, Branch is steadily focused on lending a helping hand to kids facing the same hardships she did—with projects including special children’s books and a letter-writing campaign for incarcerated parents—while at the same time reflecting on the road she has already taken.

“For years, I’ve looked up to other Miss USAs and I have followed their journeys, I’ve seen where life was taking them, and I aspired to be in their role. So I’m grateful that I’ve been able to make this dream a reality,” she says. “Honestly, I just want people to remember my heart. I want them to remember the work that I’ve done, the impact that I tried to make, and the lives that I tried to change. And I hope I’ve made Mississippi proud.”