The Football Legend at Home

BRETT FAVRE, WHO MADE MILLIONS UPON MILLIONS OF DOLLARS PLAYING FOOTBALL AND HAS MADE MILLIONS MORE IN ENDORSEMENTS, COULD LIVE ANYWHERE IN THE WORLD. ANYWHERE.

Favre famously played professional football in Atlanta, Green Bay, New York and Minnesota. His career took him all over the country. He and his wife Deana have traveled the world. Just the same, they choose to live just west of Hattiesburg in the piney woods of south Mississippi, about an hour’s drive from where they grew up in tiny Kiln in Hancock County near the Mississippi Gulf Coast. 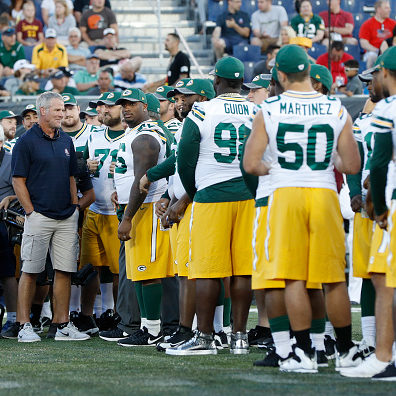 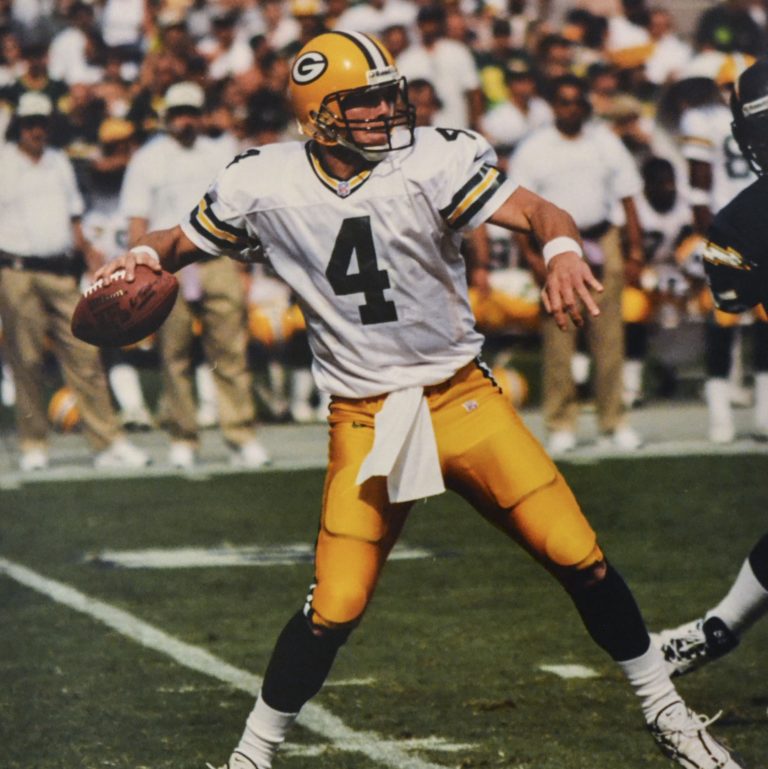 WHY? “I don’t know any other way to say it except that it is home,” Favre answers. “We love it. We love Mississippi. Actually, we could be anywhere in Mississippi; it just happens to be Hattiesburg. This is where our families are. This is where we’ve made so many good friends. The people here are our people, good people. It’s just home.

“Now, I’m not gonna tell you that sometimes we don’t come back here after a trip somewhere—like, recently to Ireland—and we come back to this heat and humidity in the Mississippi summer, and we don’t say, ‘What are we doing? Why do we endure this gosh-awful heat.’ But, always, the answer is the same. We do it because it’s home.”

Besides, Favre will tell you, he figures he owes so much to Mississippi, especially south Mississippi. He believes this place shaped him, made him who he is—a three-time NFL Most Valuable Player who started more consecutive games than any player in the history of the sport. There’s probably a lot of truth to that.

He grew up on a bayou, the son of a high school football coach and a school teacher. He has both French creole and Choctaw Native American in his lineage. As a youngster, he attended his father’s football practices and games. Irvin Favre, his father, was what football people describe as a a tough, old-school, hard-nosed football coach. He believed in blocking and tackling and running the football. How much? Well, his son, the one he named Brett Lorenzo Favre, threw about four or five passes a game as a quarterback.

“I HANDED OFF AND BLOCKED A WHOLE LOT MORE THAN I THREW,” Brett says.

He threw so infrequently, most college coaches at the time had no idea he possessed one of the strongest arms in the history of the sport. Mark McHale, an offensive line coach at the University of Southern Mississippi in Hattiesburg, knew it because he had watched Favre fling it at practices and in pre-game warm-ups. He kept telling the rest of the Southern Miss staff that they needed to give Favre a scholarship and that if he didn’t work out at quarterback he could certainly play safety or even linebacker.

Nevertheless, the night before national signing day, Favre was trying to decide between Pearl River Junior College or Division II Delta State. But then a quarterback Southern Miss had recruited in Florida decided at the last minute to attend another school. That opened up a scholarship for Favre, who gladly took it.

“I tell people all the time that was the greatest thing that ever happened to me,” Favre said. 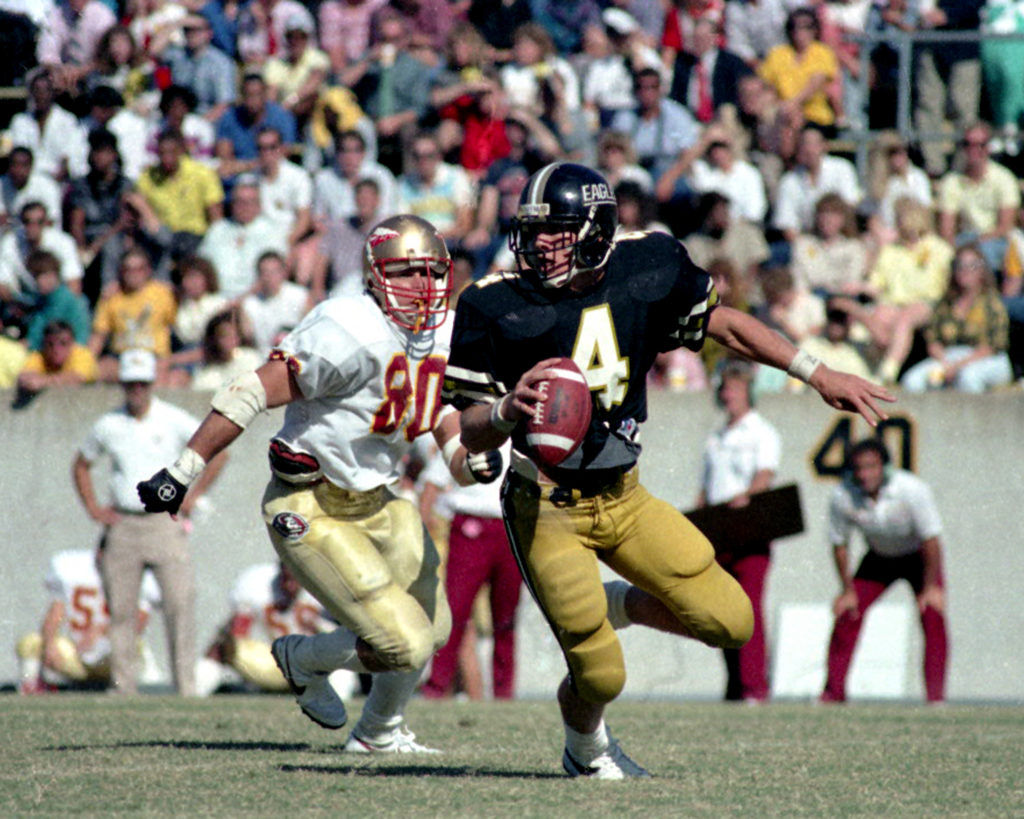 “Now, if I had had chances to go to LSU, Tennessee, Auburn, Alabama or places like that—I don’t know what would have happened. I know I might have chosen another place for the wrong reasons. When high school players ask me about making a college choice, I tell them to make a choice according to where they fit best. Southern Miss was that place for me, and I really didn’t have much of a choice. Now, I wouldn’t have it any other way.”

He began at Southern Miss as the sixth string quarterback. By his third game as a freshman, he was the starter. He took the Golden Eagles to victories over the likes of Alabama, Auburn and Florida State. His USM career really was the stuff of legend. All these years later, people still tell these stories:

• Of how he, not expecting to play, came off the bench as a hungover 17-year-old freshman to rally USM to a victory over Tulane.

• Of how he threw passes receivers heard coming. How his high-velocity passes broke receivers’ fingers if they didn’t catch it just right.

• Of how he beat Alabama’s Crimson Tide less than two months after major surgery to remove 30 inches of his intestine after a horrific car accident.

People in Hattiesburg and the surrounding areas seemingly never tire of telling those stories. And they followed him faithfully as fans when he played for the Falcons, Packers, Jets and Vikings in the NFL.

When Favre led the Packers to victory in Super Bowl XXXI in New Orleans, the NFL rented buses to take media on tours of Kiln, Hattiesburg and Southern Miss.

Favre could have told them other places to go in Mississippi, places he loves to visit.

“Man, I love going to those old river towns, Natchez and Vicksburg,” he says. “Of course, the Gulf Coast is where I grew up, and I love all those places up and down the beach.”’

Favre hunts in the Mississippi Delta. He plays a lot of golf around the state and especially at Old Waverly and Mossy Oak in West Point.

“You’re not going to find any better golf courses any where in the world than those George (his friend George Bryan) built in West Point,” Favre says. “I take people there, and they can’t believe it. It’s a golfer’s paradise.”

SO WHAT WOULD FAVRE TELL PEOPLE WHO ARE VISITING MISSISSIPPI FOR THE FIRST TIME?

“Good question,” he says. “Let me tell you what happened the other day when I was eating breakfast with some friends in Oak Grove (just west of Hattiesburg). We were sitting there talking and this fellow comes up and I can tell right away where he’s from. He’s got that Wisconsin cheesehead accent. And, sure enough, he tells me he’s from Appleton, Wisconsin.

Favre continues, “He says he moved to Mississippi three years ago, so I ask him how he likes it and he says the heat took some getting used to but now, he loves it. So I asked him what he likes best, and he said it’s the people. The people, he said, are so nice, so polite.

“So I guess that’s what I’d tell folks coming here for the first time. You’ll like what you see, but you’re gonna love the people.”

At 49, Favre has gray hair and beard, but he remains trim and chiseled. He looks as if he could still play. He says he works out more these days than when he played. When asked, Brett says he honestly doesn’t know what the future holds. He has not closed the door on coaching or on TV sports announcing.

He just knows one thing for certain: No matter what he does, home base will remain Mississippi.